Something that is certain as death and taxes? The falling sales of tablets

In recent years we have become accustomed to informing you about the results of tablet sales is not necessarily a pleasant information. Paradoxically, for the largest producers there is some light in the tunnel.

It is not possible to get information about the latest tablet sales statistics from another key word like – drop. In the third quarter of 2017, 40 million devices were shipped to customers, down from 5.4% in the same period a year earlier , with sales down 2.3 million tablets, or more than 40 million devices. It is worth mentioning that the industry has been continuously declining sales for three years, which is an absolutely unprecedented phenomenon. Interestingly, the majority of the top five producers in the market have seen growth , particularly in the Amazon, which recorded 38.7% growth, and Huawei, with sales up 18.8%. Of course, Apple is the undisputed leader, which has sold 10.3 million tablets, recording an increase of 11.4%, and the only top five maker to fall back on is Samsung, which sold 500,000 fewer tablets. 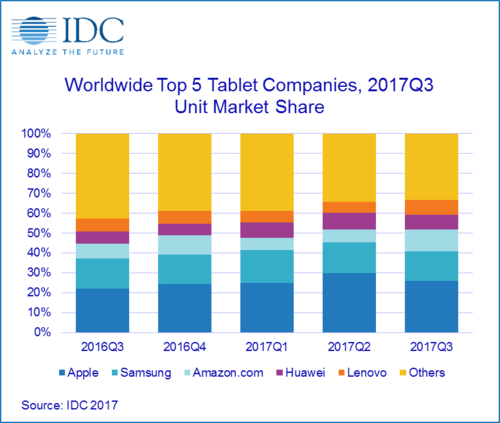 Since the top is so good, why is it so bad? About the wine of the remaining producers, whose sales fell from 18.8 million to 13.1 million. This is the number most responsible for the overall loss of the industry. And I will not be surprised by the fact that analysts do not anticipate major changes in this regard also in the fourth quarter of this year. Nevertheless, it is delighted that on this increasingly difficult market, the biggest manufacturers are doing very well – it shows that you can still make a profit on this market, presenting customers with interesting and efficient hardware. So there is hope. Source: IDC