Tablets are popular again? This is indicated by the statistics of the largest players on the market

How do tablets sell now? Surprisingly, they are doing quite well. Apple iPad, Lenovo Yoga, or maybe Huawei MediaPad? Which brand on tablets has gained the most during the year?

It is known from today that tablets do not sell as well as smartphones. If we buy any, we exchange it much less often than the phone. Due to their purpose, even laptops can break through with their liveliness, so their falling popularity is no longer surprising. The end of their era is near? Nothing indicates it. And certainly not the statistics for the third quarter. Quite the opposite, four of the top five manufacturers scored increases . Some very significant. Who do you think is the biggest winner ? We can search for at least two of them. The loser is mainly Samsung, because it was the only of the big five to have lost relative to the same period last year. Is it a bit too high valuation? 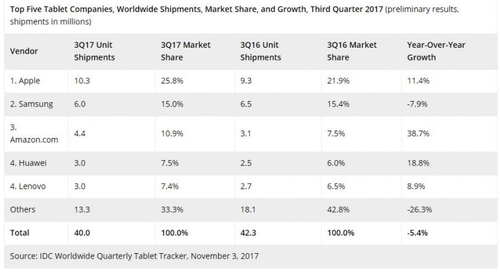 Let's get back to the winnings. The first of these is Apple, who has been sitting on the leader's seat for years. The company in this segment recorded an increase of 11.4 percent – not much, but the most important thing is that it is ahead. In my opinion, the reason for this is mainly the sale of the iPad Pro, which is the only Apple offer to compete with Microsoft Surface Pro as a device for work. The second win was Amazon – he recorded a huge increase, thanks to which he reduced the loss to the second place occupied by the Koreans – in this quarter they are in the minus. On the fourth place you will find Huawei, who also has reasons to be satisfied – over 18 percent forward. The premiere of Huawei MediaPad M5 behind the belt, so the next quarter may also be good. Only a small increase was recorded by Lenovo – less than 9 percent. I wonder how Microsoft would put it with its hybrids – the company does not provide such data. Finally, both the mentioned Surface Pro and Microsoft Surface Book 2 can be used as an advanced tablet. I am seriously wondering about one of them looking for a device to work for myself – the combination of tablet mobility and a full laptop operating system along with some of the best keyboards on the market sounds like a fairly honest offer. Source: tabletpcreview