Tablet with ChromeOS? I do not buy this idea

A photo of a tablet running on the ChromeOS system has been uploaded to the network. Acer is responsible for its production. Does the tablet with ChromeOS mean?

Recently, several ChromeOS devices already had their premieres – their proposals were shown by Dell – 5190, Acer – Chromebook 11 and 11 Spin and Lenovo – 500e. All of them have common features – they are cheap, have a basic specification and are focused on the education sector. What will the Chrome OS tablet be targeted at? I will try to answer this question in this entry. Chromebooks are specific devices that before they were given the ability to use Android applications were very limited compared to cheap laptops with windows. Now the situation looks a lot better – if you need programs from Android for everyday work and those that work as web applications, ChromeOS is a good and cheap alternative to Windows. But what can you use with a ChromeOS tablet? I have no idea. The network received information according to which Acer plans to launch a model that will not be a laptop. In the picture below you can see how it will look – the interface clearly reveals that it is not Android. 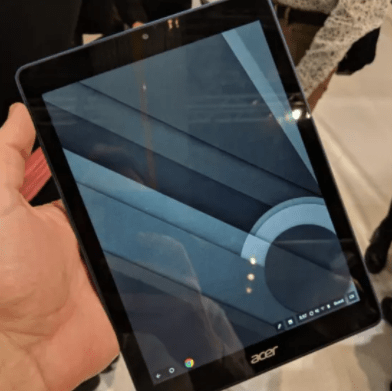 It seems to me that ChromeOS has less sense on the tablet than Android itself. It has much more opportunities than a green robot, but is it really necessary in the device, which is primarily intended to consume content, not to create it? In my opinion no. Nothing also indicates that it would be a 2-in-1 device – in that I would see a bit more sense. Despite everything, I am interested in which Acer target group is going to target your ChromeOS tablet. For sure I will follow the news about this device, because maybe I'm not right and the future of tablets lies in ChromeOS. What do you think? Source: chromeunboxed