iPad king. Even the joint forces of Samsung and Amazon can not break it

The iPad remained the most popular tablet in 2017, spreading the competition on the shoulders. Even by combining the sales of Samsung and Amazon tablets (second and third place), Apple's result is still the highest.

Analytical company IDC shared the latest report on the popularity of tablets of the five largest manufacturers. It turns out that the iPad remains the undisputed king. Apple sold 43.8 million iPads in 2017. IDC estimated that Samsung and Amazon at the same time sold 24.9 million and 16.7 million tablets respectively. Samsung took the second place, while the third was Amazon. If they were to combine their results, eventually it seems that Apple would take the first place, breaking the sum by 2.2 million copies. Huawei and Lenovo took the next places. In 2017, worldwide Apple shares on the tablet market (including 2in1 devices) amounted to 26.8%. Compared to 2016, the company recorded an increase of 2.5 percentage points. Samsung's shares remained at the same level (15.2%), although the year-on-year increase turned out to be lower by 6.4%. Last year was great for two more producers. Amazon recorded a 38% increase in the number of copies sold compared to 2016. Huawei is also a good result (increase by 28%). It is also worth emphasizing that the tablet market has decelerated again . In 2017, there were 6.5% fewer devices sold than in 2016. 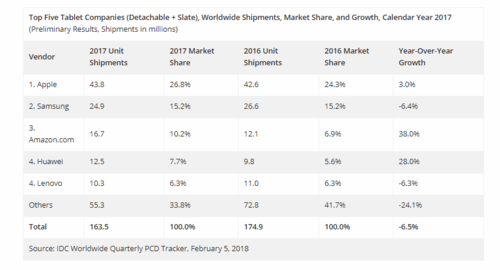